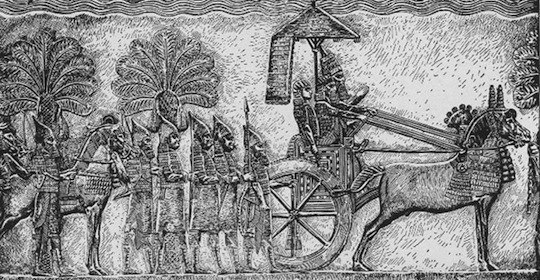 We don’t know much about the prophet Habakkuk, but he probably lived around 600 BCE when the Babylonians were becoming powerful and a threat to Jerusalem.

Habakkuk is shocked by the violence around him, and asks God how long he will tolerate it. He gets a shocking and surprising answer, but one we can learn from.

Ask a question, get an answer

God’s answer to the prophet is that he is preparing to use the mighty Babylonians for his own purposes. Habakkuk infers that God will use them as a judgment on his people, but God isn’t actually reported as saying that.

Rather, God’s message to Habakkuk is that he has his purposes, but eventually it is the mighty Babylonians who will be judged, and his people will remain when the Babylonians are long gone.

But still, God knows that his decision to “raise up” the Babylonians (or at least to allow them to come to power) will be seen as something “you would not believe, even if you were told”.

Can a holy God use people outside his chosen people to achieve his purposes?

It is never easy to be sure what lessons we should learn from a prophecy like this, or even if it says anything to us today.

Like I said, God doesn’t actually say to Habakkuk that he would use this fierce army to teach his people a lesson, but that doesn’t stop some christians concluding that God is manipulating world events today, including wars and natural disasters, to serve his own purposes. They may be right about this, but I’m not confident of it.

But I think we can see something that should shame us and instruct us. For I think God often goes outside his church today to bring new things to our attention. We should be listening, but we aren’t always.

Christians are supposed to be his agents in the world, and we ought to be the first to take up good ideas. We have God’s Spirit in us, we are (or should be) praying for him to guide us and we should not be threatened by new ideas.

But unfortunately we sometimes need a little prodding.

Jesus taught us that we should avoid getting caught in the pursuit of wealth, yet western christians are among the wealthiest people in the world, and for some christians, capitalism is part of their belief system. I think God used the hippies in the 60s to teach us what Jesus had told us long ago, that many things are more important than wealth.

I’m not sure if we’ve all learnt that lesson yet, but there does seem to be a growing awareness among christians of the need for greater wealth equality and God’s call on us to assist the poor.

Many christians have taken the view that this world is temporary, so it is acceptable to exploit its resources in an unsustainable way. The environmental movement has a greater love of God’s creation than many of us do, but we are learning. Christian environmentalism is a growing movement, thankfully.

We should have been there first, but better late than never!

Christians should care about human rights, because Jesus did. One of the features of his ministry was upholding the dignity of women and outcasts, and offering them friendship, healing, acceptance.

Racism and sexism work against this, so christians ought to be opposed to them and supportive of action to reduce racism and sexism in our societies. Unfortunately, we have often been slow to take up the cause of others who sometimes lack sufficient influence to make a difference, and sometimes we have had to be dragged unwillingly to new attitudes.

Regardless of what we may think about God’s views on homosexuality, it is clear that christians have often been discriminatory, prejudiced, intolerant and even aggressive towards the LGBTI community. It is hard to imagine Jesus behaving in the same way.

It is a sad fact that we have had to be forced by law to behave in a less discriminating way.

We don’t have to fight about it

Jesus taught us not to resist evil by force, and to love our enemies and pray for them instead of trying to kill them. That’s pretty radical stuff for 21st century christians, so how will we respond?

In the US, some christians work tirelessly for peace and against war, but many christians seem to associate patriotism with christianity. I am happy to say that in Australia christians tend to be quite prominent in anti-war and peacemaking circles.

Hopefully God won’t have to teach us this important lesson through non-believers.

We are better people for it

In all of these areas of social ethics, I see the hand of God, working through secular movements and ideas to teach us christians lessons we should have already known, but somehow didn’t.

We are better people because of it.

So let’s be more open to the Spirit

It will probably happen again. But we can learn.

We can learn to be open to God’s Spirit when he wants to teach us. We won’t always agree, but we can try to discern where God is doing something new.

Perhaps the next time God wants change to occur, we will be his agents?

Picture: Sennacherib at the head of the Babylonian army Wikipedia

« A "revelation of God’s true nature"?
After the gospels, one of the best (and shortest) books you'll read about Jesus »