This is an adapted re-blog from Is there a God? 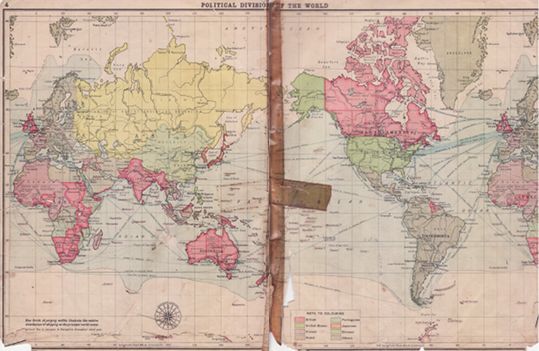 I’m not sure if I was a normal boy, but I always loved maps. So one of my favourite books was the Oxford University World Atlas. I loved it because of the diversity of its maps – it even included details on the solar system (I loved astronomy too!) and the exploration of Australia by Europeans (the unexplored parts of the country were shown black, as if the first Australians weren’t even there). As you can see, I still have the atlas, much the worse for wear – sort of like me and the world it portrays! 🙂

I was born in 1945, right at the end of the Pacific war in which my dad fought. The atlas was from about the same period – it doesn’t show Israel as a separate country (which occurred in 1948). And it shows, as you can see in the above world map, the British Empire, on which the sun never set, proudly marked red.

The might and grandeur of the Empire was a wonderful fact of life in those days – we even celebrated Empire Day with a half day school holiday in May, and fireworks in the evening.

They were innocent days. But they didn’t last. (You can read more about my story, should you be interested.)

As a boy, I had absorbed the vague idea that white people were superior, with the British the best of all. I was never taught this explicitly, but what else was colonisation about if not the “white man’s burden”? Actually, of course, along with education, medicine and democracy, colonialism also led to exploitation, profit and repression, and sometimes close to genocide. We now know these attitudes were patronising and racist, but they weren’t explicit or overt back then, and they seemed benign.

Australia was very white in those days. Everyone I knew was of Anglo origin until a Dutch boy came to our school. And I knew Australia’s first nation peoples existed, but had no understanding of their plight nor how they had been dispossessed.

Another thing that seemed to be true at the time was that we British were always on the side of righteousness in any war. Even the opium wars, the Black Hole of Calcutta and Rorke’s Drift, all incidents where the colonial British were imposing themselves on a resistant indigenous population, were somehow justified. We were the “goodies” and our opponents were the “baddies” – it was as simple as that.

And so the British and other Europeans felt quite free to carve up large areas of land in Africa and the Middle East, and set up nations, often based on illogical boundaries, which subsequently caused no end of trouble. Particularly relevant today was the division of the Middle East after World War 1 and the end of the Ottoman Empire, and the creation of Israel by the division of Palestine after World War 2, all under the supposedly benign control of Britain and France.

The war on communism, in Korea, Malaya and Vietnam was another attempt by the west to control the affairs of other peoples and nations. Somehow the christians got especially caught up in fearing and opposing communism.

The Empire changed to a Commonwealth as countries gained their independence. Nations created by European colonial powers followed suit, some peacefully, some with bloodshed and violent rebellion. There were no longer red countries all over the world map, but in the main, the former colonies didn’t seem to hold a grudge against the British

Britain was no longer more powerful than most countries, but still retained an influential position as a permanent member of the UN Security Council. And western countries, led primarily by the US, but including Britain and Australia, still think it is their prerogative to interfere in the affairs of other nations, even without UN approval.

Some politicians seem to think that it is still easy to identify goodies and baddies, but it isn’t so clear to many of us these days.

And the boom goes on

Western (and also Japanese) know-how has brought many benefits to the world. I can remember a world where we washed our clothes using a copper and a hand operated wringer, a world without TV, and one where getting our first phone and car were big events. My father told us we depended on toys too much and didn’t know how to make our own fun, but we played outside as much as we could and invented games all the time. I don’t know what dad would make of today’s electronic-based entertainment.

Technology has brought so many benefits, in medicine, transport, communication, food production and more. But the gains have come at a cost worldwide. Jobs in manufacturing and even agriculture have gone offshore, creating jobs in poorer countries, but too often the workers are exploited or even enslaved. Slavery, armaments, drugs, sex and crime seem to be some of the biggest industries globally.

Climate change is another effect of the technology boom, with the more technologically advanced countries having most of the cars and coal-fired power stations that are causing the problems, while the poorest people are often on the wrong end of changing weather patterns and rising sea levels.

So is our brave new world a better place?

I guess it all depends where you sit and how you look at it. We are at last making inroads on third world poverty and infant mortality, on racism, environment care, sexism and child abuse. But there are more slaves now than in William Wilberforce’s time, and responsible modern parents could never allow their children the same freedom to roam the streets and bushland as were were safely allowed.

Slowly, the world has become a little more equal. We recognise and repudiate racism and white supremacy these days and value our friends from other cultures. Theoretically all nations are equal at the UN. But modern technology means that terrorism and war can now be much more deadly than in the past, and future conflicts about land, water and ideology seem likely to exceed those about oil.

We are fortunate that most countries colonised and exploited by European “powers” have not carried resentment into the twenty-first century. But we should not be surprised if some, especially those whose countries have experienced interference in recent times, and/or those who have an “honour culture”, may carry a deeper grudge.

We can never go back to that old world I knew as a boy, and I’m not sure I would ever want to. But sometimes it looks a whole lot safer than the one we are now living in.

Since the actions of so-called advanced western nations have had a major impact on the world we now inhabit, we would do well to carefully consider our options and strategies for the future.

I won’t be around for too many decades more, but it would be nice to think it was a better world by then.

Where was God during all this?

Romans 8 says that God works through all things to achieve what is best, and I believe that includes major global changes like I have been discussing. I think christians have some major lessons to learn from all this.

How has the world has changed in your lifetime, and what lessons do you think christians should learn from all this?