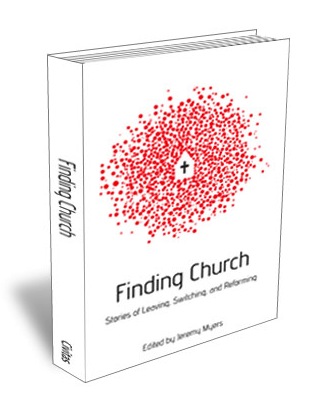 About two years ago, this book was published. I reported on it here because I am one of 37 christians who relate some of their experiences of church in the book. (My chapter is copied on this site, at Church and me.)

When I received my copy of the book, I read a number of the chapters, but never finished it and never reviewed it here, and other books became higher on my reading list.

But these summer holidays I went back to it and read every story. It was well worth the read.

Stories to illustrate the theory

There are many books and websites discussing how the church is changing, and must change, to meet the 21st century challenges it faces. Many of them are insightful and helpful.

Finding Church is a useful companion to all this, for it provides 36 stories (plus the editor’s own input) that illustrate the theory and give an insight into how thoughtful and dissident christians are feeling about the church and how they are responding.

The book groups the stories into three types of stories:

People (both “lay” people and pastors) whose negative experiences in the institutional church lead to them dropping out completely. This group is starting to be called the “Dones” for they are done with the denominational church.

A second group of christians have chosen to switch churches, sometimes several times, often because they too have had negative experiences of the church, but sometimes just because God seems to have led them that way.

This group’s experiences were often not positive, but they chose to stay within the church they were part of and try to play their part in making positive changes.

It is sobering, and sometimes harrowing, to hear how some christians have been mistreated and misunderstood. Of course we only hear one side of each story here, but it seems pretty clear that there is a lot here for churches to repent of.

Mistreatment and lack of love

We read of church members who are mistreated, even abused by the senior pastor and staff – full-on sexual or physical abuse in a few cases, but more often unloving actions that sometimes could be considered to be emotional or spiritual “abuse”.

Many of these problems are summed up in Tyson Phillips’ Nevertheless, his letter to the institutional church that he has abandoned, modelled on Jesus’ letters to the churches in the book of Revelation.

We also read of pastors who couldn’t live up to their congregation’s or denomination’s expectations. These were often pastors who wanted to explore new areas of mission and were prevented in this by congregations who (as the pastors see it) merely wanted the pastor to earn his pay by giving them what they wanted, which sometimes meant going back to the golden days of the 1950s.

In one case, a pastor began a church plant to start again without all the baggage and traditionalism, and was horrified to find within a short time they had fallen into many of the traps they thought they had left behind.

So what did they do next?

Some of those who left found it a great relief to get off the treadmill (one author describes his frantic church involvement as like being on a drug). Many of these found fellowship in meeting more informally with christian friends, something like what Pete Ward calls liquid church, and/or began to serve in the community in ways which they felt were more true to the calling of Jesus than sitting in a pew every Sunday.

For some of those who switched, it took several years to overcome the hurts of leaving a church before they were able to join another. Others needed time to sort themselves out, finding that they had attitudes that made settling in any church more difficult. Some didn’t just change congregation, but changed denominations

Some took on new responsibilities in the church they were dissatisfied with, and God used this to re-kindle their love for their brothers and sisters. Some decided to stay with the hope things would change. Some used their disappointment with the church as a prompt to do more in their community or church. One church found that when they began to value and practice unity and love within the body, God blessed them with growth. Some pastors were able to lead their churches into new directions and ministries.

It is pretty hard to generalise across all these diverse stories, but my thoughts were:

You can get the book on Amazon.

P.S. Changes on this site

Regular readers will have noticed a new look. (This is why there’s been a longer gap between posts.) Less obvious is a re-structure, with a dedicated home page and greater emphasis on some of the permanent pages, with more to be written. Hope you like it. There’s still a bit more to come.

« Does the value of human life depend on where you live?
Enough is enough – guest post by a former Prime Minister of Australia »