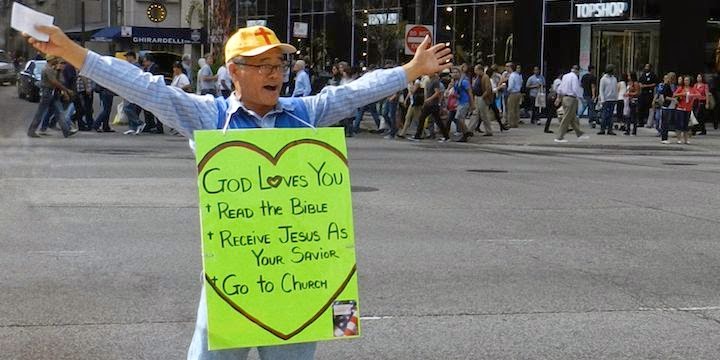 The church I attend has embarked on a strategy of growth by trying to retain more visitors – either those attending weddings and funerals, or people members have invited to attend a church service. The services have been “streamlined”, visitors are welcomed in a systematic way, and the public spaces in the church building have been decorated with signage that tries to express what the church is about.

There’s nothing wrong with being more welcoming, but I think overall this approach is about 30 years out of date and doomed to achieve little.

This post: why is 20th century evangelism now somewhat out of date?
Next post: so what is the good news in 2014, and how should we share it?

Evangelism in the second half of the twentieth century

In my 50+ years as a christian, have seen several different approaches to evangelism by churches …..

50 years ago, many churches didn’t do evangelism. They held services, taught doctrine, cared for those who attended, and served the social function of performing baptisms, weddings and funerals. Anyone who attended church would hear the gospel in some form, often not very explicit and with a very muted call to a response. Members were mildly encouraged to “witness” to their faith.

It seems this form of church was a left-over from the days when the church was at the centre of social life, everyone knew the basics of the christian faith, people grew up christian, and mission was what zealous christians did overseas.

A small number of churches and christians believed we should be very direct in evangelising. So they spoke on street corners, went door to door, handed out tracts or accosted people at universities, shopping centres or railway stations.

This was based on assumptions opposite to the “do nothing” approach – everyone outside the church was lost and needed to hear the good news, and we shouldn’t allow social niceties to prevent us telling them.

Crusade evangelism had been around for a century or more, especially in America, but Billy Graham revitalised the approach. Graham preached to literally billions, and millions responded to his appeals for people to “accept Jesus Christ as their personal saviour”.

Many other evangelists adopted similar approaches. However crusade evangelism had its critics – crusades seemed an artificial environment and it was doubtful that all those who went forward were “truly converted”. And, increasingly, non-believers were resistant to the highly charged religious atmosphere.

American televangelists did a similar style of evangelism on TV, but lacking Billy Graham’s integrity, and exhibiting weaknesses in the areas of personal power, wealth and sexual ethics, have done a lot to discredit this form of evangelism.

The waning effectiveness of mass evangelism led many churches to invest in equipping members to do personal evangelism – or “gossiping the gospel”, as one method was called. Ordinary people were encouraged to learn how to give their personal testimony (either how they became a christian or what God meant to them today), answer questions about the faith, and hopefully “lead their friends and family to Christ”.

There is a lot to be said for this approach, for it is built around friendship and respect, and (hopefully) approaches each person as an individual. However it is limited by several factors:

Because of these factors, I found that many of my work colleagues respected my faith, would occasionally discuss faith issues with me, but made it quite clear that they didn’t want me to say anything except if they asked.

The teen years are when most people make explicit choices to be a christian (or to take up other causes), so church youth groups turn out to be one of the most effective forms of evangelism. Teens invite school friends to youth group, and even those who aren’t all that interested may still attend to socialise, and some are converted – though many seem to give up within a few years.

Some churches adopted a similar approach and began “seeker services” where everything was slick, quick and entertaining – all gauged to make the visitor feel comfortable and willing to hear a shortish message that related as much to life as to the Bible.

It seemed to work for a while, especially in the US, but in other countries (notably UK and Australia) surveys show only a minority of non-churchgoers are willing to take the step of attending. This approach also denies members some opportunity to receive whatever they feel they need from more conventional services.

This approach seems to be waning (except in my church!).

These approaches are based, at least in part, on assumptions and principles which seem to be either wrong or out of date.

Most people are resistant to going to church

Many approaches to evangelism depend on non-believers attending a religious event, which many are unwilling to do. Making people feel uncomfortable isn’t a good start.

Too many “conversions” don’t last

A once-off event isn’t a good place to make a life-changing decision, and many who make decisions that way don’t last. People need more time.

Most evangelistic approaches are built around words and information, as if people don’t know the basic facts about Jesus. Many don’t, but many do, or think they do. People are becoming immune to the hard sell, and need more than words.

Most evangelism offers little in the way of solid reasons to believe, but just assumes the truth of the New Testament. These days, increasing numbers of people aren’t willing to accept this.

People are wary of formal religion, with (as they see it) its rules and requests for money, with its authoritarian leaders and intolerance. They want to be free from structure and being told what to do.

The classic christian evangelistic “sell” is built around sin, judgement and hell, which doesn’t appeal to most people. Jesus used a different approach to normal unbelievers, reserving most of his critical statements for the religious.

Perhaps most important of all, people want to see how our christian faith works out in practice, especially with so much bad publicity about evils and excesses in the church. They need time to experience christian community and to observe how christian faith makes a difference.

Evangelism in the twenty-first century

Next post I’ll try to uncover what I believe the Holy Spirit is teaching us about evangelism in the twenty-first century. Please stay tuned!

« Christians and climate change: don't be fooled again!
Evangelism in the 21st century »