With the London Olympic Games about to begin, now is a good time to remember one of my ‘heroes’.

He was probably Australia’s greatest male sprint athlete, a silver medallist at the 1968 Games in Mexico City. This is the best an Australian male sprinter has ever finished, and in a time that, amazingly, is still the Australian record. He is almost forgotten in his own country, yet famous in the US for something more important than running fast.

This is the story of Peter Norman – a story that deserves to be remembered.

Norman died in 2006, and the two black athletes who finished first and third, Tommie Smith and John Carlos, flew to Australia to be pall bearers. Why?

.
Before the Games, Norman was not expected to earn a medal, but he qualified for the final in world record time, and followed this up with a run half a second faster than his previous best to win silver. Norman was about 5m behind world record holder John Carlos coming into the straight, but stormed home to beat Carlos into second place behind Smith.

But drama followed. The two US runners told Norman before the medal presentation that they were going to protest against racism in the US and in the Olympics by wearing black gloves and giving a “black power salute. They also wore black socks and no shoes to highlight black poverty and inequality in their home country. Norman offered to support them by wearing a badge for the “Olympic Project for Human Rights”. Then when Carlos realised he had forgotten his black gloves, it was Norman who suggested they wear one each (thus explaining what had always puzzled me, why the two Americans raised different hands!). 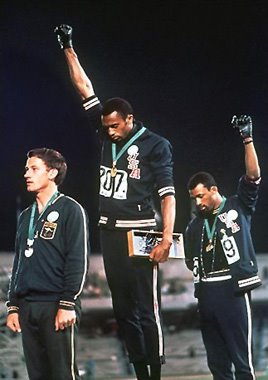 The IOC reacted strongly against this intrusion of politics (they said) into sport. Smith and Carlos were sent home, were banned from the Olympics for life and received death threats. Norman, who also expressed public criticism of the then “White Australia Policy”, was disciplined.

But worse followed. Norman, Australian champion and record-holder and still 5th fastest in the world four years later, was not picked in the Australian team for the 1972 Olympics. (Had he been able to repeat his run of 4 years earlier, he would have won silver again.) He dropped out of athletics and public view. 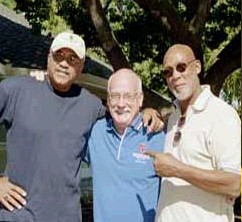 When the 2000 Olympics were held in Sydney, Norman was the only surviving Aussie Olympian not to be invited to participate in a lap of honour. The Australian Olympics Committee has often been accused of being hidebound and out-of-touch, and their treatment of Norman, in 1972 and in 2000, appears to be another example. But Norman was something of a hero to black US athletes, and champions such as Ed Moses and Michael Johnson welcomed Norman to their quarters.

Smith and Carlos remained in contact with Norman over the years and so it was that they were keen to attend his funeral and act as pall-bearers, as a last opportunity to express their respect for Norman.

Norman’s stand, and the price he ultimately paid for it, were not a surprise to those who knew him. He was a committed christian with a Salvation Army background, and had a strong belief in equality and human rights. He apparently never regretted his actions, and said later:

“I did the only thing I believed was right. I asked what they wanted me to do to help. I couldn’t see why a black man wasn’t allowed to drink out of the same water fountain or sit in the same bus or go to the same schools as a white guy. That was just social injustice that I couldn’t do anything about from where I was, but I certainly abhorred it.”

Norman was a fine sportsman, a good bloke, he supported the underdog, clashed with the authorities and stuck to his beliefs. This should qualify him as a genuine Aussie “hero”. And, to me at least, an example of a christian supporting justice and goodness even if it costs.

« Westboro, love and hate
Why christians should care about climate change »