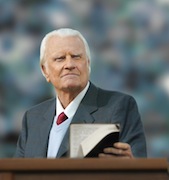 I have previously posted on the various views christians have on who will be saved (Can only christians be saved?). The exclusivists say only those who specifically believe in Jesus. The universalists say everyone, eventually. And the inclusivists say anyone who follows whatever light they have been given.

Recently I came across a quote that showed Billy Graham’s view.

In a 1997 interview with Robert Schulller, Graham said:

“He’s calling people out of the world for His name, whether they come from the Muslim world, or the Buddhist world, or the Christian world or the non-believing world, they are members of the Body of Christ because they’ve been called by God. They may not even know the name of Jesus but they know in their hearts that they need something that they don’t have, and they turn to the only light that they have, and I think that they are saved, and that they’re going to be with us in heaven.”

Unless he’s changed his mind since, that makes him an inclusivist.

It is interesting that perhaps the two most influential English-speaking christians in the twentieth century (CS Lewis and Billy Graham) were/are both inclusivists.

It is my view also. It doesn’t mean we demean the uniqueness and work of Jesus, just that we think God’s grace in Jesus extends more widely than may be obvious to us. This view hasn’t stopped Billy Graham being an energetic evangelist. Read more at Can only christians be saved?