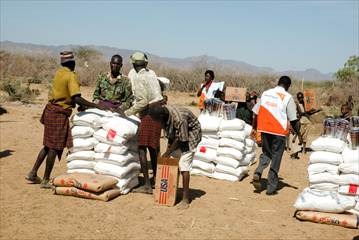 Almost one billion people, an eighth of the world’s population, are hungry as you read this. Why?

The average price of food has risen sharply over the past decade, as this graph shows.

This has made it more difficult for poorer nations to purchase food, with the result that 21 African countries and 10 in Asia require external assistance.

What can you and I do?

The most obvious thing we can do is to donate money to a responsible aid organisation. This doesn’t provide a long term solution, but is necessary for crisis situations.

Change the way we live

There are several things we can change in our lifestyle to support poorer nations:

However these steps are not likely to be a major source of positive change on their own. World action at a national level is also needed, and we can advocate for this by pressing our politicians.

Can we ignore this?

« Billy Graham on who will be 'saved'
Don't think twice, it's alright? »