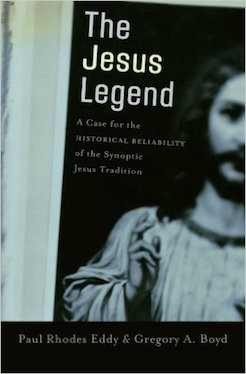 Some books on Jesus and the New Testament are clearly apologetic in nature, seeking to argue or defend a certain viewpoint, whether it be sceptical or believing.

Other books clearly aim at being academic, impartial, seeking to advance academic opinion.

This book, which is almost a decade old, is kind of both. I have only recently read it, and I think it is worthy of a review.

Where the authors are coming from

Both authors might be classed as evangelical christians, though Boyd is on the radical, Anabaptist fringe of evangelicalism. Both are more qualified as theologians than New Testament scholars. The book’s cover says it makes a “case for the historical reliability” of the synoptic gospels (Matthew, Mark and Luke). In that sense, this is a work of apologetics, defending a positive view of the gospels.

But at the same time, the authors are well qualified (both have relevant PhD degrees) and have done their homework well. The book addresses a wide range of questions in a comprehensive way, with copious footnotes and references. It engages the views of a wide range of scholars and presents generally persuasive arguments.

It is more detailed and academic than most apologetic books, and is well worth the time, whether you want an apologetic or academic approach.

What you get for your reading investment

The authors examine a wide range of arguments against the historical reliability of the New Testament gospels – wider than the “Jesus Legend” title may suggest.

Must miracles be ruled out of any neutral historical study? The authors argue for a more open approach. I think they are probably correct, but it is hard to see atheist scholars accepting their approach.

Is it feasible that the stories of Jesus are largely legendary? Were first century Jews receptive to influence from pagan legends, and do alleged parallels between legends and the gospels support this conclusion? The authors argue against these conclusions, following lines of thought that would probably be accepted by most historians these days.

Non-gospel witnesses to the gospel stories

It is sometimes argued that there is no sources external to the gospels that give information about Jesus. The authors give a fairly standard discussion of non-christian writers who mention Jesus, and then what I found to be a very useful summary of references and allusions to Jesus’ life and teachings in the writings of the apostle Paul.

The gap between Jesus and the writing of the gospels

For almost a century, scholarship on how the stories and teachings of Jesus were transmitted from the eyewitnesses to the gospel writers was dominated by form criticism, the theory that this information was transmitted orally in small units called “forms” (e.g. parable, miracle story, pronouncement story). This led to certain conclusions about how the different forms were transmitted and what they could and couldn’t contain, and how they would inevitably be short.

In common with many (most?) scholars these days, Eddy and Boyd question much of the conclusions of form criticism. They say form criticism isn’t based on good evidence of oral story-telling in middle eastern oral cultures, doesn’t consider recent studies of memory (a topic that has developed further since this book was written), and doesn’t recognise the relatively high level of literacy of first century Jews (compared to other cultures). As Maurice Casey has argued, it is quite likely that some of Jesus’ teachings were written down at the time (e.g. by Matthew the tax collector, who would have been literate).

So they argue that the connection from eye witnesses through to gospel writers is reasonably reliable.

Are the synoptic gospels history?

Scholars have argued about the genre of the gospels – are they history, biography, legend, fiction or midrash (a commentary or expansion on a scriptural theme by a Jewish teacher)? Scholars have generally concluded that they are ancient biography, a genre that requires historical accuracy about the main events, but allows some “hagiography” and flexibility in the selection of material. Eddy and Boyd argue the gospels are a unique genre, closest to historical biography, but they were designed to be recited or read aloud, and so retained an oral emphasis.

The authors finish by discussing the methodology scholars should employ in assessing the historicity of the gospels, and how the gospel stories and writers measure up. They consider “problems” such as apparent contradictions or disharmony between the gospels, and offer some “solutions”. Not surprisingly, they conclude that the gospels provide a historically reliable portrait of Jesus and his teachings that is “substantially rooted in history”.

Who should read this book?

Although it is a decade old, I found this book to be well worth reading. It is not impartial, but it is thorough and generally convincing (I found one or two matters to be unconvincing).

It is a solid read, so requires a little more concentration than a more popular apologetics book. The authors write from a christian perspective, so sceptics may find it less valuable unless they want to engage with counter arguments.

This book is probably most suitable for christians looking to extend their understanding of historical issues surrounding the gospels. It will provide them with much good information, plenty of arguments and plenty of references.

I really enjoyed it and appreciated it. So I recommend it, and will soon be blogging on some of the matters it discusses.

« The kingdom of God – a ticket to heaven?
Seven facts about climate change that all christians should know »