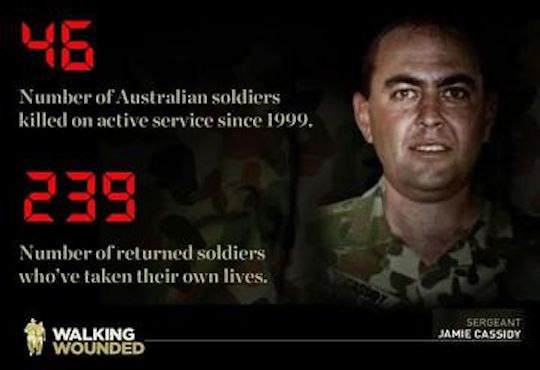 I must admit it jolted me a little.

I was walking slowly through a local shopping centre when I was confronted with the sign shown above. 46 Australian soldiers have been killed on active duty in Iraq, Afghanistan and elsewhere, since 1999. But more than 5 times that number of returned soldiers have committed suicide in the same period.

What was I going to make of that?

I did a little research

After seeing the sign several times, I still felt as troubled. So I decided to check out a few facts.

Many soldiers returned home suffering from “shell shock”. Some never recovered. And there are stories of men exposing themselves to fatal enemy fire rather than endure the hell of the trenches and the constant artillery bombardment.

There was no real treatment, and not even a lot of sympathy. Men were expected to just get on with their lives.

I had the impression that WW2 was not as stressful as WW1, but apparently it was worse. More than a quarter of casualties were caused by war trauma.

Again many returned with Post Traumatic Stress Disorder (PTSD) and while there was greater recognition of PTSD, it was still insufficiently treated.

Last weekend the Sydney Morning Herald published an account of one girl’s experience when her father returned home from army service in the Vietnam war. It is a sad story but worth reading.

Vietnam veterans have fought hard to have the effects of herbicides and defoliants, and of PTSD recognised, and many felt that the public campaign against the war had stigmatised them. PTSD was not properly recognised until about a decade after the war ended, but eventually returned soldiers were able to receive some treatment.

This account from the Vietnam Veterans Association of Australia outlines some of the effects of PTSD in later life – including nightmares, panic attacks, alienation and feeling edgy.

The toll continues in these recent combats.

In the US, the Centre for Research on Globalisation estimated that about 30% of returned soldiers suffered from PTSD. It quotes a Harvard University report that “some 1.56 million US troops — 56 per cent of all Afghanistan and Iraq veterans—were receiving medical treatment at Veterans Administration facilities and would be granted benefits for the rest of their lives”. This could cost of the order of a trillion dollars out of a total cost of these wars of about 5 trillion dollars. Reports from less than half of the American states indicate that 22 vets suicide each day!

Australian soldiers have begun to go public on the stresses of war. And so the Walking Wounded charity was formed in Australia, to raise awareness and assist those suffering PTSD.

PTSD has now been studied

You can find plenty of information about PTSD now. For example:

What’s a pacifist christian to think?

Jesus taught very strongly an ethic of non-violence. As a christian who tries to follow Jesus, I think that must be our default position. There are some situations where violence may be the lesser of two evils, but I believe they should be rare.

But I also know that most people don’t agree with that, and most countries will defend themselves when attacked, and some countries feel the need to intervene in other countries.

But regardless of what I, or anyone else, think about war, I also know that Jesus cared deeply about people victimised, hurting, mistreated and “bent out of shape by society’s pliers” (to quote Bob Dylan).

Two thoughts remain with me strongly.

We go to war too easily

Politicians, supported by the media and public opinion (often manipulated) too easily send young men and women off to war. The financial costs can be enormous, but the cost in human lives lost or ruined can be horrific.

Some wars (e.g. World War 2) may be unavoidable, but too many wars in recent decades (I’m thinking Vietnam, the second Gulf War and Afghanistan) have very questionable morality, doubtful aims and very little useful outcomes for the enormous cost.

We may hope that the rather cavalier way that the “war on terror” was launched, and the enormously negative outcomes on both the Middle East (something like 300,000 dead and the region destabilised, which led to the rise of ISIS) and the “coalition of the willing” (in the US, 1.5 million soldiers traumatised for life, $5 trillion cost and a crippled economy for almost a decade), may have some effect to reduce politicians’ propensity to see war as a solution.

The government, and all citizens, have a responsibility to care for returned soldiers

While I think most wars are deeply wrong, I have great sympathy for those who return with any injury or trauma. They were simply doing what their government ordered them to do.

It shouldn’t be left to a charity to care for these young men and women. Whatever the cost, they should be fully supported by the government and taxpayers and receive every possible treatment to ameliorate the impacts of their trauma.

Surely we must do everything possible to prevent these suicides!?

Saying it better than I can

Only Nineteen by Redgum is very familiar to me. I was conscripted into the Australian army during the Vietnam war. I didn’t go overseas, but I participated in final guerilla warfare exercises before the 7th battalion RAR went to Vietnam and I observed much of what soon became real for those soldiers.

A beautiful live version of a plaintive and angry Dire Straits classic, reminding us the “we are fools to make war on our brothers in arms”.

« Are you an extremist?
Giving flowers, living in the opposite spirit »