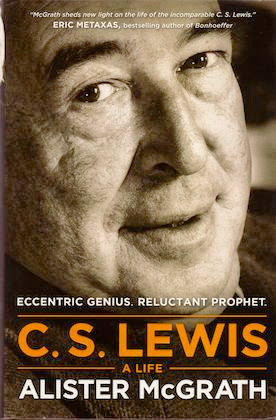 CS Lewis was probably the biggest influence on my young christian faith. I read virtually everything of his I could get hold of, especially enjoying Mere Christianity, Miracles, The Pilgrim’s Regress, That Hideous Strength, The Last Battle and his essays Is Theology Poetry? and Modern Theology and Biblical Criticism. I read his autobiography, Surprised by Joy and the first book of his letters.

As I grew older I moved onto other writers, and only occasionally went back to Lewis, but I remain a fan. So I was very pleased to receive this book for a Christmas present, and had read it before New Year.

Background (for those born on another planet 🙂 )

CS Lewis was born the younger of two brothers in Northern Ireland near the close of the nineteenth century). His mother died when he was only 10 and his education-conscious father sent him to boarding school and private tuition in England. He was subsequently able to gain entry to Oxford University.

His university studies were interrupted by the First World War, and he served in the squalor and madness of the Western Front trenches until he was fortunately injured and evacuated before he could suffer the fate of so many of those who never returned.

He gained Triple First in Classics (which included classical languages, history and philosophy) and English Literature, a rare achievement and eventually became a Fellow and Tutor at Oxford. Late in his life, he was appointed Professor of Medieval and Renaissance English at Cambridge.

CS Lewis decided in his teens that he didn’t believe in God, and remained an atheist well into his twenties, but around 30 he became convinced that theism was a better explanation of the universe than any other belief. However he still had problems believing in christianity because he couldn’t accept the idea of Jesus dying for the sake of people’s sins.

His friend and colleague, JRR Tolkien was a major help in overcoming this barrier. He told Lewis he understood the doctrine, he just couldn’t grasp its meaning with his imagination, which was very important to him. But, Tolkien argued, Lewis could appreciate ancient myths of dying and rising gods. So if he saw the death of Jesus in the same way, except that it actually happened, then he could “see” it.

It worked, and Lewis embraced christianity with both intellect and imagination.

Lewis had already written some poetry, but now he began writing christian books as well as academic ones. His books proved easy to read and understand, being simpler, deeper and more imaginative than most christian writing at the time.

During World War 2, the BBC wanted to broadcast religious talks to encourage people in difficult times. Lewis had gained a reputation as a popular lecturer at university, his books were growing in popularity, and he was seen as non-denominational, so he was asked. He eventually gave 17 of these short radio talks, which were later turned into the book Mere Christianity.

Lewis became a celebrity, a position only increased with his publication of three science fiction novels and the 7-part Narnia series for children.

Lewis published several other popular books, gave talks and wrote essays, and wrote further academic works. He married an American Jewish-Christian, apparently so she could remain in England, but their love blossomed (as seen in the film Shadowlands) and he was devastated when she died of cancer.

Lewis died in 1963, on the same day that John F Kennedy was assassinated.

McGrath seems to be a thorough guide and reporter, and the book is not a bit too long at just over 400 pages. He provides lots of background information and lots of incidental detail that I didn’t previously know. He reviews Lewis’s popular books fairly, recognising both strengths and weaknesses.

In particular, he assesses two aspects of CS Lewis quite frankly and carefully.

Many who write about Lewis treat him as a hero or a saint. But McGrath gives us a sympathetic but “warts and all” picture, covering a number of difficult matters:

McGrath recognises the enormous impact of Lewis’s writing in his time, and on several generations since. He points out that few other christian writers have had Lewis’ imagination, nor his ability to make christian faith interesting and readable.

Lewis has been especially influential in the US. Mere Christianity is regularly chosen in polls of American christians as the most influential religious book of the century, and people still mention it today as important in their conversion.

Christianity Today magazine called him “the Aquinas, the Augustine and the Aesop of contemporary evangelicalism”, high praise indeed. McGrath adds: “There is no doubt that Lewis has been instrumental in changing the cultural outlook of American evangelicalism.”

If you’ve never read anything of CS Lewis, I recommend trying Mere Christianity for starters, or That Hideous Strength if you’d prefer a novel. Or you can find some of his classic essays online – Is Theology Poetry? and Modern Theology and Biblical Criticism are recommended.

And if you are a Lewis fan, this may be the definitive biography, and I think you’ll enjoy it.

Next: some CS Lewis quotes on the Bible