Black Stump is a christian music and arts festival that has been held near Sydney for the past 25 or so years. I have just come back from my 15th Stump, and it was one of the best ever.

Cataract Scout Park is in bushland half an hour south of Sydney. It has somewhat primitive facilities, but enough space to set up about a dozen medium to large tents for venues, a few portable food outlets, and camping space of thousands of people. Originally design for teens and young adults, it now hosts all ages.

And so for 3 days and nights, we get to hear speakers, listen to bands, enjoy comedy dance, drama and poetry and just hang out with friends. Life doesn’t get much better!

Bands and speakers are generally home-grown, but this year special guest was US christian activist Shane Claiborne. 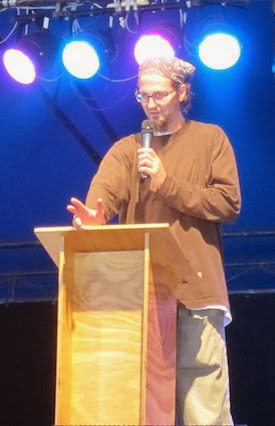 So much to do, so much to learn

There are so many things going on at once that you have to make choices. But we got to see some excellent bands – from straight out rock, to technopop, to alt folk to jazz, and hear some impressive poetry and comedy. Comedian Fraser Tustian performed a memorable monologue of CS Lewis’ Screwtape Letters.

Social justice and christianity in action

Christian activism was a major theme this year. I lead a “justice and mercy” team at our church, and we are currently exploring beginning a few new programs, so this was perfect timing.

Shane, who lives in an open urban community in Philadelphia, had many stories of standing and working in solidarity with the victimised and hurting in the US and overseas (he has has worked with Mother Teresa in Calcutta and as a peace activist in Iraq). He is a gentle man, and I think I learned as much from his attitude and love for people as from his stories and ideas. Major themes were love and grace, and addressing suffering, violence, materialism and oppression.

If you ever get the opportunity to hear him, or read one of his books, I’d say take it.

Other seminars touched on consumerism, child trafficking, caring for refugees, good and bad foreign aid, and Fair Trade. I’ll be posting on some of these topics over the coming weeks.

Get out of the box!

As I said last year, it is too easy for us to get comfortable in our familiar routine and beliefs, and it is good to be challenged to think through new ideas, especially be someone with Shane’s “street cred”.

If I can, I’ll be back again next year!