This morning I attended the local Anzac Day dawn service, which commemorates the Australian and New Zealand soldiers who have died in battle. For many Aussies, this is the most sacred day of the year. I don’t feel that way, and I don’t usually attend, and it was a time of conflicting emotions and thoughts.

Anzac Day wasn’t a big deal in my family when I was a boy. My dad served in the army in New Guinea (he commanded a small searchlight and anti-aircraft unit), but he never talked about it much and never attended Anzac or returned soldier events, I don’t know why.

My generation tended to find Anzac Day a problem, a glorifying of war. Alan Seymour’s 1958 play The One Day of the Year (which I studied at university) sums up the polarisation of the returned soldiers and the next generation. When Australia joined the Vietnam war in 1962, many of this “baby boomer” generation disapproved, and some joined violent and vociferous protests against it.

Australia’s involvement stretched our military capabilities, so the Government conscripted randomly-selected 20 year olds to fill out the numbers. I was one of those unfortunately selected, and spent two years in the Australian Army, though I didn’t serve overseas. The experience helped change me, from a conservative, patriotic supporter of this fight against godless communism, to close to a christian pacifist.

So for a time, Anzac Day appeared to have a diminishing future. But then a surprising thing happened – the next generation found meaning in wearing their grandfather’s or great grandfather’s medals and remembering our history, and the numbers attending dawn services slowly increased. There would have been several thousand attending the suburban dawn service this morning, and most services around the country are packed.

In the cold and dark, thinking ….

Thousands of soldiers gave their lives in service. Many thousands more suffered injuries, while families back home suffered loss in many ways. This morning I watched a family who lost father and husband in Afghanistan lay a wreath to remember him. These people all deserve our help, thanks and respect.

Only a pawn in their game?

But I have also read enough about World War 1 to know that it was an unnecessary war, as much the result of posturing by jingoistic politicians as anything else, and one where the generals treated human life with disdain much of the time, using inhumane tactics to gain very little. Anzac Day itself commemorates a glorious and bloody failure. So many of our wars have been less than necessary, and it is the humble soldiers, not the politicians, who bear the brunt.

Reminders like Anzac Day make me proud and thankful to be an Aussie, but I also feel grief and anger.

Aussies don’t do ceremony well, we tend more to informality. And the traditional Anzac service is very old fashioned – a short march where a group of old diggers are joined by twice as many children and a band, a guard of honour around the Cenotaph (an ’empty tomb’ Anzac monument), old christian hymns (The recessional, Abide with me and Lead kindly light) which few people feel comfortable to join in, a few readings, and the bugle playing the mournful Last Post as the sun slowly rises and the sky lightens. I can’t help wondering what the average post-christian Aussie thinks about all the ‘God stuff’.

It will be interesting to see if the dawn service ritual changes as the World War 2 generation passes on.

What is a postmodern christian to make of all this?

The dawn service is a nominally christian service, but Jesus gets hardly a mention. The God of Anzac is a God who rewards sacrifice and valour. Would Jesus be part of a dawn service? Perhaps he would, because he was where people were hurting, but whether he would agree with the content is problematic. Have we christians allowed the teachings of Jesus to be overshadowed by patriotism?

But one day a year, many Aussies get up early, think of sacrifice and look beyond their own interests. They call on God and pray, sort of. Does this reminder turn anyone’s thoughts back to God? I don’t know. But regardless, Anzac Day is growing in influence while the church is declining. What do we think about that? 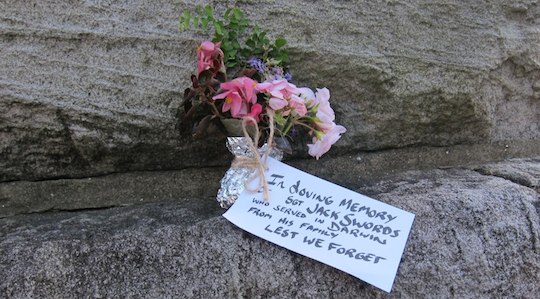