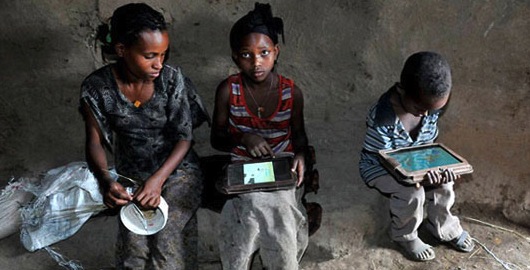 One Laptop Per Child is a US-based charity which is seeking to create affordable educational devices for use in the developing world. Due to the difficulty in providing and funding teachers in some locations, it has tried the innovative, perhaps crazy, idea of leaving laptop or tablet computers with kids without any instructions.

Outcomes have been mixed, and interesting, and have something to teach us.

In an amazing experiment reported by dvice and MIT technology Review, a bunch of tablet computers, still in their boxes, were left in two remote villages in Ethiopia where the kids had never seen writing before.

They were given no instructions, although the villagers had previously been taught how to use a solar charging device to recharge batteries. But despite the lack of any previous education or experience, the kids figured out how to turn the tablets on, open up apps and use them to learn songs, draw pictures and eventually read, write and spell.

After about 6 months, they knew enough to customise the desktop and activate the camera.

But it doesn’t always work out so well. OLPC provided almost a million laptop computers to school children in Peru, in the hope that this would improve their educational outcomes. Unfortunately, it didn’t, according to The Economist Perhaps laptops aren’t as intuitive as tablets. Perhaps the school environment meant they were seen as “work” rather than “play”. Who knows?

Educationalists have known for years that people, both adults and children, learn best when they are actively involved in the process. Self discovery is often the best way to learn, but active participation, by way of discussion, multimedia, and putting learning to immediate practical use, is also helpful. Passive learning (just reading or watching, or, worse, just listening) is much less effective.

Yet the modern western christian church has built its teaching and discipleship around passive listening to sermons and talks!

This satisfies the ministers’ needs, by allowing them to teach (albeit much less effectively) many people at once; it also allows them to have their egos stroked, if this is important to them. It also seems to satisfy at least some of the consumers’ needs, for it allows congregations to feel like they are learning things without having to put in much effort.

But it leaves the church too much of a one-man band, weak, de-motivated, and under-utilising the gifts within the whole body. For more on this, see Sermons – not how we learn best?

The Ethiopian kids, if not the Peruvian ones, show us what could be achieved if we changed our discipleship methods from passive to active learning. Progress might appear to be slower and more random, but motivation, creativity and the end result (mature disciples) would all be improved.

Photo from the dvice report.